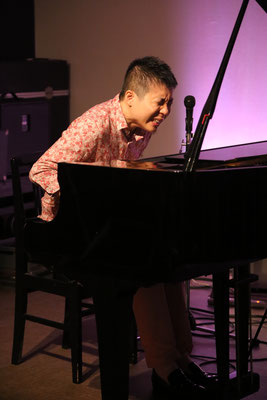 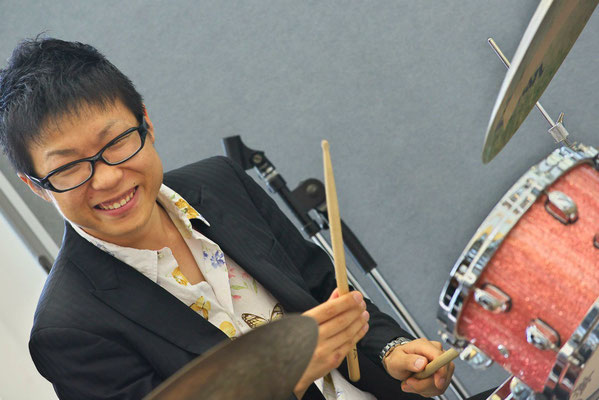 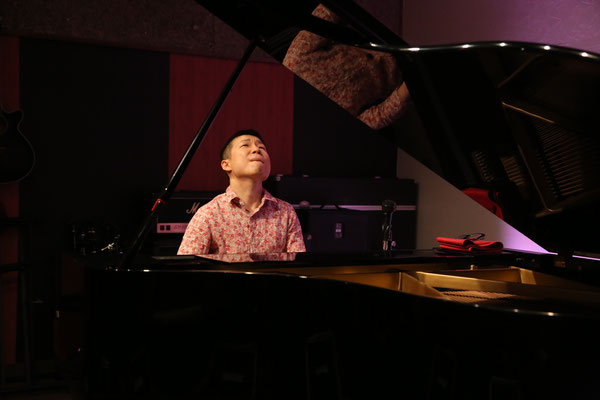 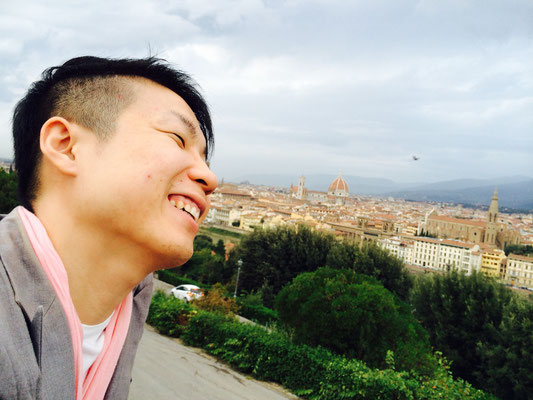 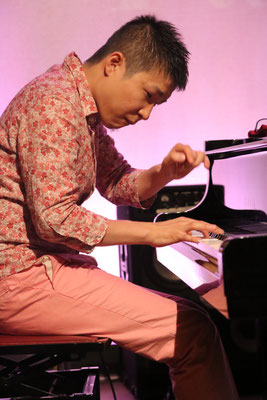 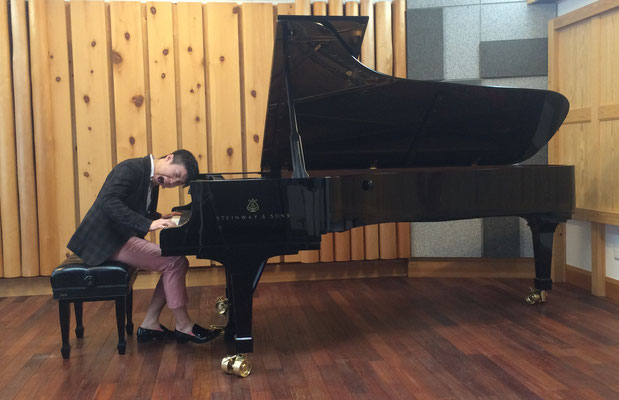 An extraordinary type of musician who has paved his own way forward with valor amid many difficulties. His music comes from his wish to make every single person on this earth happy, while making their lives fulfilled and ablaze through music.

Born in Nagoya city (Aichi Prefecture) in 1987, Asada took up piano at the age of four, music composition at the age of seven, and drums at the age of ten. During his high school days, he belonged to Free Hills Jazz Orchestra, a Jazz band made up of young Jazz musicians from different schools in Nagoya. Asada was awarded with the Best Soloist Award in Japan Student Jazz Festival for five times in total for both piano and drums. This record has never been broken in the entire history of this national competition.

Right after he entered Koyo Conservatory of Music (Berklee International Network) in 2006 on recommendation, he started his activities as a professional Jazz drummer, travelling throughout Japan and performing with numerous first-class musicians as a drummer as well as a composer and an arranger.

In 2012, he has started performing as a piano improvisation performer and succeeded to make full use of his musicality and view of life in creating and performing music.

His performance is full of power, positivity, and love. Free from any fixed concepts, theories, his style is so intuitive and instinctive, defying the common sense of the traditional piano performances and drum performances. It simply grasps the heart of every person as well as giving them the “energy for tomorrow”.

Not only improvising music of many different genres depending on the guests and the atmosphere, he performs complete instant improvisations as well. With his perfect pitch and the ability to improvise, he performs more than 3,000 pieces.

Playing both as a supporter and the main performer, he puts a lot of value on

the ”dialogue of different sounds”.

He has performed on TV (NHK), radio, Tokyo Disneyland, at weddings, funerals, ceremonies as well as in U.S. and Italy. Many of the pieces he composes are offered to various companies and media. He has been awarded with many awards.

In November 2013, he played as a drummer in the samba-Jazz album “Morro du Urbana” of Marcelo Kimura and got a favorable reputation.

In January 2014, he released his first solo album “Love, Appreciation, and Happiness” and won popularity.

He is also a teacher and a business owner. He has established a music

school ”Amol” in Nagoya with the motto of “Believe in yourself, Expand your

A completely free style of performance without any rule such as chord progression. Similar to Jazz in a way that it is improvisational, but totally different. Both Asada style and Jazz do have (introduction), melody, improvisation, melody, and (ending). However, basic Jazz does have a designated chord progression and tempo throughout the music. Asada style doesn’t. That’s what allows Asada to transform his feelings more freely and straight into sounds, controlling both the tempo and development by himself. Asada has adopted this style to enable himself to perform “Music of Soul” that is true and instinctive, reflecting the heart with his whole body. Asada’s music is simply incomparable.

Make people from all around the world happy through music.

I’m a little proud of:

My absolute pitch (though sometimes a bit troublesome), the Simian line on my palm.

If there’s a wall, just break it. If there’s no way, Make it by yourself”

Music played by someone playing out of his/her soul.

Age 4 ~ Before becoming a professional musician

Started taking piano lessons (His sister was taking lessons first, but he was always imitating her too).

Based on the perfect pitch and musical senses he acquired in his early childhood, he started to prefer playing freely to classical music, on his emotions, images, etc. He began to spend more time developing his unique individuality.

However, he has performed at classical competitions and concerts such as the annual PTNA Piano Competition, JOC (Junior Original Concert), and JPF (Junior Piano Festival), proceeding to the final selections and being awarded many times (Tow Silvers in JPF, Best Performance Award in PTINA Grade C Final Selection).

Entered Chikusadai Junior High, known as one of the most prestigious schools in the world of Jazz, and joined the Jazz orchestra club as a drummer. This was a life-changing event where his life suddenly started to accelerate.

Having been awarded with the Nice Player Award (Solo) in Japan Student Jazz Festival 2001, Asada’s started to aim at becoming a professional Jazz musician.

timbales. Performed in 50-60 concerts a year and accumulated experiences.

In winter, he became the concert master of Kogei High-Sonic Jazz Orchestra. With unique practice methods Asada adopted, the band was awarded with Group Award in Japan Student Jazz Festival for two years in a row.

Awarded with Nice Player Award in Japan Student Jazz Festival 2006 (FHJO) with both piano and drums. This was the first accomplishment that was ever made, and this record has never been broken in the entire history of this historical competition. Being awarded five times is also said to be a never-to-be-broken record.

Experienced performing at Disneyland, The 2005 World Exposition in Aichi, TV & radio programs, with world famous performers such as Keiko Lee and Nobuo Hara.

Entered Koyo Conservatory of Music (Berklee International Network) in 2006 on recommendation and started playing in small bands, compositions, and arrangements.

And thanks to Kiyoshi Takeshita, Shuhei Mizuno, Go Shimada, Hitomi Ueda, the teachers of Koyo Conservatory of Music (Berklee International Network) who are the top Jazz musicians, office staffs and students of the school, Asada developed his career at a rapid pace.

In 2007, Asada formed a big band consisting of professionals and amateurs, “United Jazz Community” and became the leader. At the beginning, they performed only the music of the Buddy Rich Band. However, after the encounter with Shota Yamada, a notorious composer and an arranger, the band started to expand its repertoire.

In 2008, he made a debut at STAR★EYES with Kiyoshi Takeshita’s band and Jazz inn LOVELY with Go Shimada’s band.

March 2008, he graduated from Koyo Conservatory of Music (Berklee International Network) and performed vigorously in various bands and sessions throughout Tokai area.

Also worked as a drum instructor at Shimamura Music between April 2008 and September 2015.

Received a lot of influence from musicians such as Yasuhiro Kohama, Eiichiro “E.T.” Tohyama, Daisuke Kurata, Yoshihiko Naya, Osamu Hikage, and Koji Goto on not only musical techniques but also how to live.

Between February and August 2009, he played as a regular drummer of Yoshihiko Naya’s Quartet. That has become an opportunity for him to grow significantly

In April 2010, while working as a teacher at Ongaku Kobo CON, Asada engaged in music therapy, welfare, and rehabilitation. After meeting Hiromi Yamada who was also a teacher, he became a music therapy assistant for preventing the dementia and depression for the elderlies, as well as oral care.

Joined the band of Show Seki, a guitarist who has joined the solo album of Koshi Inaba (B'z), and played as a regular drummer until 2012. He also had the chance to participate in the 1st album of Hiromi Yamada produced by Show Seki and went on the album tour.

In 2010, Asada formed his own band ”Pinky” where he played his original music and

In the Spring 2011, he dissolved “United Jazz Community” for a further leap forward as a professional musician.

In July 2011, he played with a professional Jazz pianist Yutaka Shiina and was greatly influenced.

Joined “Miso Banana Quartet”, a Samba Jazz unit, in September 2011 and broadened his perspectives. The members were Marcelo Kimura (Leader), Kenichi Ohkubo, and Taichi Sugimaru (Support). Asada was very much moved by Kimura’s soulful and heartful character and performance as well as his personal magnetism.

Fall 2011, Asada was going through a hard time. He was struggling with his enthusiasm to express his emotions more through music. “I want to express it more freely. Otherwise, the sounds will be fake. I want to be true to my soul”. After several months, he came to a conclusion.

I will do what only I can do.

As a result, he decided to perform as a piano improvising performer from February 16th, 2012.

He didn’t care if his work as a drummer decreased or if he would be criticized for playing two instruments.

Starting Activities as a Pianist

Asada started his activities as a pianist, uploading YouTube videos and so on. Working mainly on solo, he was now able to express his emotions 100%.

In November 2013, he joined the 1st album of Marcelo Kimura as a drummer. His performance was highly acclaimed in both Japan and Brazil.

In January 2014, he released his first solo piano album “Love, Appreciation, and Happiness”. The album gained a lot of good reviews as “music that enriches the spirit”.

Until then, the Jazz unit he led as a drummer did not have fixed member. However,

(Base) joined as fixed members and they performed mainly at events, shopping

centers, and outlet malls where anyone could enjoy their music.

In 2014, Asada worked vigorously on improvisation piano performance, welfare activities, teaching, and music therapy and learned a lot of things from these experiences.

Left Shimamura Music where he had been teaching since when he was 20. He also left Ongaku Kobo CON so that he could focus on the management of his own school Amol.

Appeared on TV Saitama and performed solo piano. After the performance, he was inundated with inquiries.

His never-ending music activities for the happiness of every single person on this earth will go on.